I love French onion soup and I'd like to try to make it at home. I saw someone making it on a cooking show and it looked pretty easy. Put onions, broth, cheese, and some other stuff together in a specific way and BOOM. French onion soup. Except that french onion soup seems to require at least six onions, all of which must be cut up.

Everyone's eyes are sensitive to onion fumes. According to the Library of Congress, it's because of an enzyme discovered in 2002 called lachrymatory-factor synthase, which makes the substances in a cut onion unstable. Onions produce syn-propanethial-S-oxide that stimulates the eyes' lachrymal glands when the onion is cut. 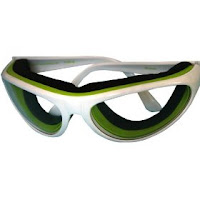 But my lachrymal glands are more dainty and delicate than other people's. I need to open a window if an onion is being diced 20 feet away. When I cut an onion, I wear giant Jackie-O-style sunglasses, and even then I need to step outside if I'm doing more than one.

So French onion soup has always been beyond my grasp. Until now.

$20 seems like a lot to pay for a kitchen gadget with a single purpose, but it's not a lot to pay for a lifetime of homemade French onion soup. Well, $20 plus the cost of onions, broth, cheese, and some other stuff that goes into the soup.