Telling time is lame. Seriously, clocks with hands to tell time have been around since the 15th century. Do you think people would have created those clocks if they had magical technology that would simply write down the time for them in plain numbers? Of course not. 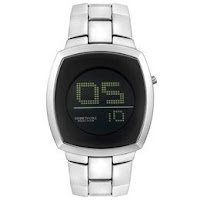 Yet we still use stupid analog clocks. We all have to learn how to tell time based on angles. And ten years after we learn that, we all have to do a bunch of math problems based on the ability to tell time. The angle between a clock's hands at 4:13 is useless knowledge.
And don't even get me started on analog clocks with no numbers. Who came up with that? I don't know for sure, but I'm guessing he or she works at the airport.
All this pointless analog-clock-related knowledge is taking up space in your brain that could be filled with other, more important things. Like Esperanto. Or tarot-card reading. Or lists stuff to buy through affiliate links.
Also, how many meetings do you have that start at 5:30ish? How frequently do you have to catch a train at 6:22 or so? I can't tell you how many times I've seen someone who's wearing a watch pull out a cell phone to check the time. You know why they do it? Because analog watches are useless.
So I buy digital watches. Very few decent-looking digital watches exist, which is ridiculous. Surely I am not the only person out there who both a) lives in the 21st century and b) is neither a jogger nor a rubber-watch aficionado. I found this Kenneth Cole model a few years ago at Century 21 in New York and I wore it up until the battery died (I continue to be too lazy to replace it). It's technically a men's watch, but I can attest to the fact that it does not look manly.
I know your first urge is to make fun of me because I can't tell time, but seriously think about it for a minute. Analog watches are for suckers.