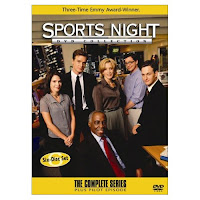 What might be more uncommon among people like me is that I don't own all of the DVDs in the Sorkin collection. Sure, I own the West Wing Seasons 1-4 (before the kidnapping/shark-jumping fiasco). I also own The American President, which is one of those movies with a final scene that you can watch over and over again (like Dirty Dancing and My Cousin Vinny and A Few Good Men, another Sorkin classic). 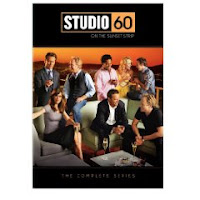 But I don't own either of Sorkin's single-season tv shows: Sports Night and Studio 60 on the Sunset Strip. And yes, I know that Studio 60 wasn't very good. It pretty much jumped the shark in the second episode when Sorkin actually tried to write comedy sketches. Jokes are not his forte. Witty banter? Yes. Slapstick? Definitely not. But I still watched all the episodes when it aired, and I'll still watch them repeatedly if you buy me the DVDs.
I actually discovered Sports Night after both the West Wing and Studio 60. Now that I've seen Sports Night, I think I'll be able to understand all the references to that show in the other two shows, which will either deepen my appreciation of Sorkin or else it will annoy me.
Either way, I want these DVDs.
Sports Night - The Complete Series Boxed Set

Studio 60 on the Sunset Strip - The Complete Series