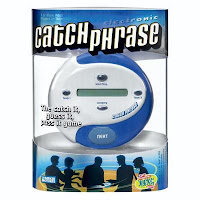 I love board games of all kinds. I also tend to befriend competitive people, so I'm always a little scared to play games like Risk and Settlers of Cattan with the people I know. Get together games (Taboo, Apples to Apples, etc.) tend to be a safer bet. More yelling, but less silent seething anger at someone who attacks Australia or corners the market in wheat.

Catch Phrase is the best get together game ever. At it's most basic level, it's a combination of Taboo without rules and Hot Potato without potatoes. The electronic version is best.

You and your overly competitive friends divide yourselves into two teams and sit in a circle of alternating team members and pass around the game (which is roughly the size and shape of a panini). When it's your turn, you read the word or phrase on the screen and try to make your teammates guess it by any means necessary as the game beeps progressively faster in a crazy-making way. When your team guesses correctly, you pass the game to the next player as the beeps get closer and closer together and start to eat your soul. The team left holding the game when the beeps stop is stoned to death.

For example, if the phrase on the screen is "Great Wall" you might say something like "This is a man-made object that can be seen from space," or "This is a miles-long structure in China." Or you could just start shouting "BLANK BLANK OF CHINA" over and over again as the game beeps faster and faster and your teammates grasp for answers: "People's Republic?" "Communist Party?"

Sadly, I can never play Catch Phrase with that group of friends again.