I've really enjoyed getting to know you again over these past few months. We had a thing in high school for a while, when you were new to the market and your ads were all over daytime tv, but then we fell out of touch. We both had other things going on. You were no longer widely available on drugstore shelves, while I went off to college and started wearing thrift-store t-shirts every day. I thought I had outgrown you. 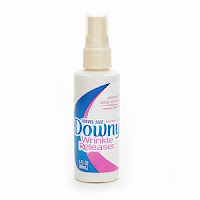 I never stopped thinking about you, though. Sometimes I would look for you on the shelf at Duane Reade or Google you to see if you were still around, but nothing ever came of it. I even experimented with other wrinkle free sprays, but that's all it was. It never got serious; they were just too expensive. Not like you.

Then fate brought us back together. I remember that day three months ago like it was yesterday. I was meandering down the aisle of the Smart & Final looking for fragrance-free dryer sheets and there you were, just as I had remembered you. It had been a long time, but I couldn't stay away.  bought you and brought you home with me and we've been together ever since. You were there for me on my first day of work and at that conference where I stuffed all my nice clothes into a duffel bag. I really feel like we have something special.

I'm going to say something now and I don't want you to feel like you have to say it back. I've wanted to tell you this for a while, but I was afraid of how you'd react. I know it seems a little fast, but, well, I love you.