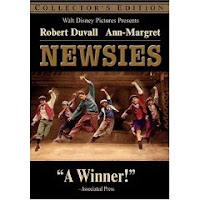 I have a very grown-up appreciation for Newsies. I won't lie. When I was younger, I had a thing for Christian Bale, with his slightly-above-average singing voice and post-adolescent good looks. Who didn't? But now my love of Newsies is a mature love that has nothing to do with the singing, dancing young men I loved so much when I was 12. That would be gross (and probably illegal).

Now I appreciate the artistry of the film. The choreography. The historical accuracy. The uplifting message that a rag-tag group of newspaper boys could take on the establishment and win. This movie is a must-see for anyone who is fascinated by turn-of-the-20th-century New York politics or who appreciates musical theater as an art form.

*Update*
I just found out that Christian Bale was 18 when Newsies was made. I can now officially say that he is dreamy in this movie. Totally legal.