I have terrible taste in television. Sure, I watch the shows that you watch--30 Rock, Mad Men, Entourage--and I  casually reference them in conversation with normal people.  But I also watch the Real World/Road Rules Challenge. I TiVo America's Next Top Model. I watched Studio 60 long after the rest of the world realized it was terrible. If there's an elimination-based reality show on Bravo, no matter how ridiculous the premise, chances are good I love it.

And there's a special place in my heart for anything on Lifetime. During one of those wonderful please-don't-take-my-baby movie marathons they had a woman-on-the-street interview segment before each commercial break. One of them featured the following exchange (I am not making this up):

Person with microphone: And why do you watch Lifetime? 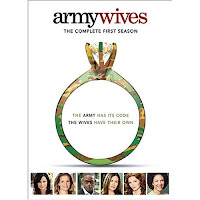 That's how I feel about Lifetime. So when I found out about Army Wives, the Lifetime Original tv drama, I set my TiVo immediately. It's great. It's like a combination of M*A*S*H and The Facts of Life. All the women are sassy and full of salt-of-the-earth wisdom while they struggle to maintain normalcy in the midst of hostage situations and explosions on post.

If you like The Real Housewives of Orange County and Top Design, you won't be disappointed with Army Wives.

Bonus points because watching it makes me feel patriotic. Hate the war, love our troops.