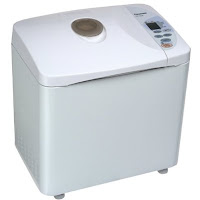 But bread eludes me. My first attempt at a rustic loaf ended with a frisbee-like disc of semi-leavened food product. Apparently there's a difference between yeast and rapid-rise yeast; the two are not perfect substitutes. I found that out the hard way.

So I tried again, this time with sandwich bread. It went better with the rising and the proofing. The dough was even the consistency I wanted it to be--doughy. The resulting loaf, however, did not live up to the hype of homemade bread. It tasted a lot like flour and water combined to make something with a bread-like look and feel. And while that's exactly what bread is, somehow it's more delicious when other people make it.

I could try again, but instead I will just declare that I want a bread machine. I picked this Panasonic one from Amazon, but in reality you should buy me one off Craigslist or eBay. For some reason, a lot of people seem to be getting rid of perfectly good bread machines at any point in time.

Their loss is my gain. Imagine non-frisbee-like rustic loaves, fully leavened and completely delicious. Sandwich bread that both looks and tastes like homemade bread. Pizza dough I've been planning to make for a while now but so far have been too lazy to attempt. Healthy bread made with whole wheat flour, flax seeds, and organic water.

This is such a good idea that I'm resisting the urge to make a joke about sliced bread and more recent occurrences that are better than it.

At least one of the loyal readers of this blog may be thinking that we do not have enough counter space for a bread machine. That is a lie. There is space beside the Kitchen Aid mixer and that's where we shall put it.

I am powerless to resist. Bread machines may be the best thing since sliced bread. Are you happy now?